SD 1st anniversary is coming, and we wan't to prepare something great to celebrate our 1st year with you guys.
In June of 2017 I came up with the idea of creating a new guild, a place where members would help each other to become better players together, but first of all, a place to make new friends and talk not only about the Game, but also about Life.

And, thanks to the amazing guys I met since there, we built this awesome guild together, and here we are, completing 365 days of life this week, June 13th.

First of all I want to say thanks for each of you who contributed to SD success, and still do your best to improve the team.
Team work is probably what we have the best, and I'm proud of everything we did, and do, together.

Let's keep the hard work for the next days, months, years! Dragons have long life, and with the new members that join us every month we can make this guild live forever, and be alive even outside the Shadow Era world.

About the special contest:
. SD Council is now discussing about something cool to bring to you, some funny contest with prizes to celebrate our anniversary.

We will publish here as soon as we make a decision

Sky above us
Earth below us
Fire within us

First of all a congratulations to our Guild on our first year anniversary! Thank you everyone for all your contributions!

And to celebrate this day we have prepared a Dragon Quest for everyone with nice prizes.
Each quest has to be done in Quick Match or Meltdown. You can receive a reward only once per quest and it will last until the 24th of June so hurry guys!

If you complete a quest, post a screenshot in here or via our telegram and we will **verify and send you the SC
**Since we do not have a dragon category in the game please based it for now on the card's picture or name.
Otherwise, the council can judge if the card aligns with the dragon theme.


Without further ado, here are the Dragon Quests!

Quest #2 - The Dragon's Roar!
Destroy a total of 3 items or abilities in a game using these cards: Shriek of Vengeance or Shriek of Revulsion (30 SC reward)

Quest #5 - Hello Dragons! I am Back!
Resurrect a dragon ally from a graveyard and attack the opposing hero at least once with that ally (ie. Gravebone, Resurrect, Ghostmaker) (30 SC reward)

Quest #6 - Into the Dragon's Lair
Be lucky and snatch a dragon's tooth with: Stop! Thief!, Serena's Ability or Draw from opponents Deck/Graveyard (50 SC reward)

Quest #7 - I'll do any Anything for Free!
Summon a dangerous dragon creature for free! (50 SC reward)

Quest #8 - Obsessive Dragon Disorder (ODD)!
Heal a dragon creature at least once and keep it alive until the end of the game! (50 SC reward)

Quest #9 - I will take what is mine with Fire and Blood!
Deal the last lethal blow to the enemy hero either by Fire or Claw damage! (30 SC reward)

Quest #10 - Fear not your death for your doom is set!
Sacrifice a dragon ally to kill an enemy ally! Use the following cards: Last Flourish, Energy Extraction, or Energy Discharge (30 SC reward)


Good luck to all of you dragons! And again congrats to our Guild!

"Each quest has to be done in Quick Match or Meltdown" ... Really ?! WTF lol... you really want us to finish with a poor rating

Are you sure you can't accept some quests to be completed in Unrated or at least Campaign mode ?

Quest 6 : we can snatch Dragon's tooth card only with Stop Thief ? no other weapons destruction are allowed (LLN, Focused prayer, Smashing Blow,...) ?
...and what about Serena ability if you manage to steal the Dragon's tooth directly from opponent's hand ? will it be accepted ?

Quest 7 : is Reactorary considered as a Dragon ally ?... if not, then use Stardust Actualizer + lots of Dragons allies in deck

How are you? Thanks for the comment I have updated Quest 6 and 10 as suggested.

For Quest 7, good point about stardust actualizer that could work with lots of dragon ally (i have also in mind Nathanias for human). But not sure if reactionary is considered a dragon though..

For this quest we will go ahead with rated or meltdown only. I am sure we can create a nice deck that could be good for rating involving dragon allies.

Quest #9 - I will take what is mine with Fire and Blood!
Deal the last lethal blow to the enemy hero either by Fire or Claw damage! (30 SC reward)
:
photo_2018-06-20_15-59-13.jpg
You do not have the required permissions to view the files attached to this post.
The Deep Dragon
Top

Well done bragon! Good luck with rest of the quests.
SD KOLODI
Dragon Council
Sky above us, Earth below us, Fire within us
GMT+2 | Europe | Italy | Venice
: 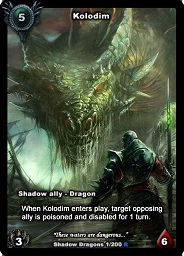 Done quest 9 v tj dubdub
You do not have the required permissions to view the files attached to this post.
If you can't spot the sucker in your first half hour at the table. Then you are the sucker
Top
Post Reply
7 posts • Page 1 of 1